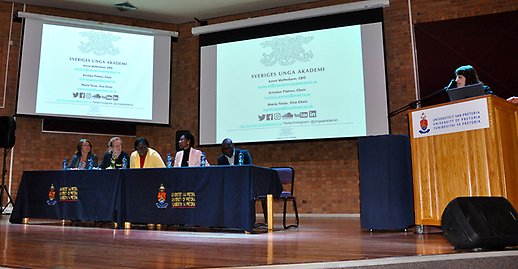 Workshop on how to support young scientists

External link, opens in new window. in Pretoria last week the young academies in South Africa and Sweden co-hosted the workshop How could countries support emerging scientists in developing into excellent scientists and successful academic leaders? The workshop was open to all participants in the conference including researchers, university management and research funders.

The overall purpose of the workshop was to share experiences on how countries could support their emerging scientists in the best way during the transformative years where the young scientists get established as independent researchers and research leaders.

The event was opened by Prof. Philani Moyo (Co-chair of the South African Academy of Sciences) and Prof. Kristian Pietras (Chair of the Young Academy of Sweden) followed by a panel discussion facilitated by Dr Katarina Wadstein Macleod. The panel session was introduced by Dr Emmanuel Ojo who talked about the project Global State of Young Scientist (GloSYS) that has done a study on which challenges young scientists meet in their effort to establish themselves as independent researchers. The panel then discussed numerous aspects of this. We learned from the Executive Director at the Swedish Research Council, Ann Fust, on funding schemes aimed at young researchers and from Prof. Eva Åkesson (Vice chancellor Uppsala University) on the importance of tenure track and involving early career scientists in decision-making bodies. Prof. Esther Akinlabi talked about interaction between universities and industry and Prof. Pulengo Segalo spoke about gender inequality and the importance of addressing this at all levels.

External link, opens in new window. run by the young academy in South Africa. The programme aims to grow mid-career African academics in the areas of thought leadership, team management and research development and enable them to contribute to the development of a new paradigm for science in African, focused on its contribution to solving the complex issues facing both Africa and the global community. Prof. Marie Wiberg presented a networking programme that the young academy in Sweden has been running for five years with the national parliament. Through the programme researchers and politicians meet and visit each other at the university or parliament, with the purpose of developing a mutual understanding of research and politics.