Young Academy of Sweden at the UNESCO General Conference

The UNESCO General Conference determines the policies and the main lines of work of the UN organ responsible for coordinating international cooperation in education, science, culture and communication. It is arranged every two years, this year Young Academy of Sweden was invited as part of the delegation with the Swedish National Commission for UNESCO.

The 39th conference took place 30 October to 6 November at the UNESCO headquarters in Paris. 195 member countries meet; the working languages are Arabic, Chinese, English, French, Russian and Spanish. The meeting begins with an opening ceremony in plenary, the agenda is approved and the general policy debate is introduced. Heads of delegations attend the plenary meeting and take part in the general policy debate. The aim of the global conference is to follow up and decide how to prioritize in advancing development in the UNESCO areas: education, science, culture and communication. 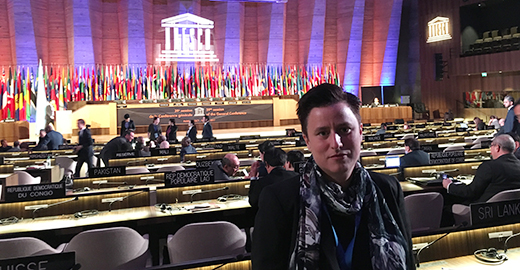 CEO Anna Wetterbom at the General Conference. Member States have a place which is allocated in alphabetical order according to the name of each country in French, starting with a country which is chosen by drawing lots. Photo: Maria Lindholm

As part of the Swedish delegation, Young Academy of Sweden (YAS) and nine other organizations were welcome to observe the policy debate and the Swedish and Nordic meetings. YAS participated in the work of the two scientific committees, which addressed issues such as researchers’ status, strategy for action on climate change, decision on an International Day of Light on May 16, 2018, and an International Decade of Ocean Science for Sustainable Development (2021-2030). The Academy also attended some of the many side events, for example GO-SPIN, the Global Observatory of Science, Technology and Innovation Policy Instruments.

The L’Oréal- UNESCO For Women in Science program

Since 2016 YAS work together with the Swedish National Commission for UNESCO and L’Oréal Sweden in awarding the L’Oréal- UNESCO For Women in Science Prize in Sweden.

– The For Women in Science Prize Sweden is part of a larger context; there is also for example an European edition. At the General Conference I met those responsible for the L’Oréal- UNESCO For Women in Science program globally, and discussed how we can nominate candidates to the international edition, says CEO Anna Wetterbom.

– It was very interesting attending the General Conference, we learnt a lot about how UNESCO works and got ideas on how we can, and already do, contribute in these areas. We are very happy that we got the opportunity to join the delegation. It was fantastic!

39th Session of the General Conference