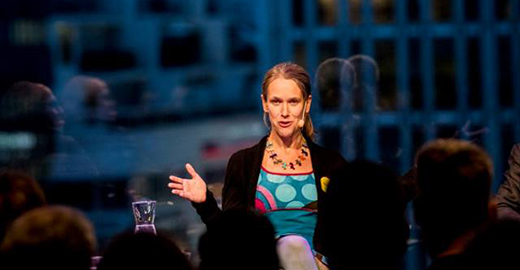 On the panel were also Chemistry laureate Rod MacKinnon and Karolinska Institutet’s new Chancellor, Professor Ole Petter Ottersen. Torsten Wiesel moderated the panel, which offered a joyous conversation. Ole Petter Ottersen confessed that a rather stupid question had led him into his research career. Sara Strandberg told how she as a veterinary student found herself pondering questions like: what would happen if you fell into a black hole? This eventually led her to pursue a career as a particle physicist instead. She also highlightened that she appreciates being part of a large collective (e.g. at CERN), cooperating to answer complex questions: “I think it is fantastic to be one out of 3,000 people that can achieve something together that is much bigger than I could do on my own. We make a pattern together.” Rod MacKinnon’s groundbreaking research did not start with the perfect question, he admitted, but eventually it proved to be of great importance for our understanding of many diseases of e.g. heart, muscles and nervous system. Several members of the panel stressed the importance of curiosity as a driving force in their research, and to allow for a bit of serendipity. The panel concluded that the questions that we get excited about are the best. Nobel Center

How to ask a question