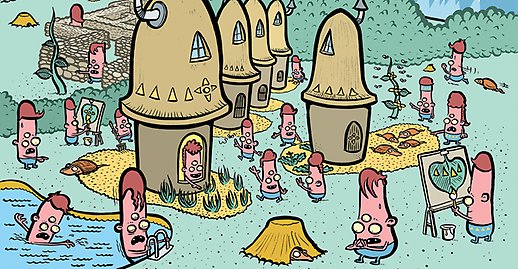 Expedition Mundus is a fun educational game that familiarises scientific research. In this game ‘science’ refers to all branches of research; the sciences, mathematics as well as the humanities and social sciences. Mundus shows participants that science is not about ’knowing a lot’, but rather about curiosity, creativity and logical thinking.

The game leaders initiate the game by telling the background game story. Then they hand out question cards to teams of players, who may choose difficulty level. Harder questions take more time to solve, but they also give more points. The teams then look for clues and evidence among the game posters at the venue. When a team think they have found an answer, they approach a game leader. If the answer is correct, the question card is “published” along with its corresponding answer card on a table supervised by game leaders. On the table with published questions and answers, knowledge about Mundus’ world accumulates during the game, for other teams to learn from and use. The team with most points wins the game. A game session lasts about one hour.

Expedition Mundus is developed by the young academy in the Netherlands, De Jonge Akademie. Young Academy of Sweden launched the game in Sweden in 2015, in both Swedish and English.

1. We play Expedition Mundus at our summer research school Forskarmöten (Research Encounters) 2016. Academy member Palle Dahlstedt, Professor in art and technology at Aalborgs University, is one of the game leaders and introduces the game. 2. Correct answer? A participant approaches a game leader to present the team's theory. 3. Correct answers are “published” on a table and provide clues for all teams. Photo: Anna Kjellström and Annika Moberg/Young Academy of Sweden

©The copyright of Expeditie Moendoes (Dutch) and Expedition Mundus (English) for primary and secondary education is owned by De Jonge Akademie & De Praktijk. The original game was made possible by SNS REAAL Fonds and the Royal Netherlands Academy of Arts and Sciences (KNAW).