My current research explores the process of early modern globalisation, using as a case study Swedish prisoners of war in the Central Asian borderlands during the years 1700 to 1730. As an effect of the Great Northern War, around 25 000 men and women in the Swedish army were taken as prisoners of war, and spent more than a decade abroad. Some of these prisoners were forced into service among foreign powers, others volunteered for such service, and some ended up in slavery. By combining North and West European, Russian and Chinese sources, it is possible to trace the role of these men and women in arenas such as intercultural communication, diplomacy, circulation of knowledge and trade. Together, these arenas tied the world together, they globalised it. Thereby, my research can show the role of coerced people such as prisoners in global history.

I am interested in how cultural encounters have affected people's everyday lives, and how this everyday life has in turn changed the world. My research thus constitutes an intersection between social, cultural, maritime and global history, with a special focus on gender. Regionally, I am particularly focused on East and Central Asia, and in terms of time in early modern times.

NordGlob Podcast, Living on the Edge 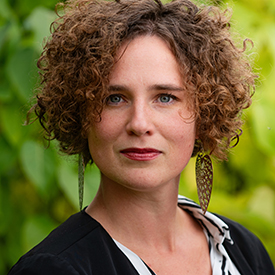 Born: 1984
Other: A fan of penguins who once stood in the middle of Kyrgyzstan without money. Has academic detective Kate Fansler as a role model (minus all murders).

“I am a member of the Young Academy of Sweden to change and preserve: I would like to help safeguard the rights gained and the progress made; at the same time, the academy is offered and the opportunity to work to reverse negative trends, and achieve higher education and research that is equal and world-leading at the same time. I would especially like to work with internationalization many faces and before:, and think about which groups can be disadvantaged and benefit from internationalization as a goal and practice.”