Gunnar Öquist is a Swedish biologist and professor of plant physiology at Umeå University, and served as the permanent secretary of the Royal Swedish Academy of Sciences from 2003 to 2010 where he also led the initiative to form the Young Academy of Sweden.

Öquist, born in 1941, graduated from Uppsala University in 1967 and enrolled in postgraduate studies in Umeå in 1968. He earned his Ph.D. at Umeå University in 1972 with the Thesis Some effects of light intensity and iron deficiency on pigmentation and photosynthesis in the blue-green alga Anacystis nidulans. He was made docent in plant physiology 1974. After two years at Lund University he returned to Umeå in 1976 and was made a professor in 1981. Öquist's field of research has been the adaptation of photosynthesis in cyanobacteria, algae and higher plants when they are submitted to variations in light intensity, temperature, supply of water or supply of nutrition.

Öquist has a passion for, and vast experience in, the area of research strategy. For example he served as the main secretary of the Natural Sciences Research Council (NFR), a former Swedish governmental body for science funding, from 1993 to 1999. Together with Mats Benner, Professor in Research Policy and Vice Dean for Research, School of Economics and Management at Lund University, Öquist conducted a large study comparing Swedish research to similar countries on behalf of several private and public Swedish research funding agencies. The study is documented in the 2012 report “Fostering breakthrough research – A comparative study” and has led to a vivid debate and initiatives for research.

Öquist is a member of the Royal Swedish Academy of Science since 1986. In 2012 he was welcomed as an Honorary Member of the Young Academy of Sweden together with the Academy’s scientific patron, Torsten Wiesel.

The Royal Swedish Academy of Sciences 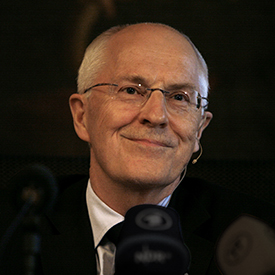 Born: 7 juli 1941
Family: wife, children and grandchildren
Interests: hobby carpentry
Other: During his time as Secretary General, Gunnar presented many good news, several Nobel- and Economy prizes, (image above) and was the host for the prize winners as they visited the Royal Swedish Academy of Sciences.