Malaria is an infectious disease that has plagued humans since the dawn of humanity, and is still a major global public health problem. Malaria is caused by unicellular parasites that infect red blood cells and cause a disease characterised by cyclic fever. Malaria parasites are fascinating and complex organisms where the interaction with the host determines the outcome of the infection. An infection with the same parasite in different people can range from being asymptomatic, to causing mild or severe illness with a fatal outcome.

The research in our research group focuses on how malaria parasites interact with their host by secreting a large number of proteins, and how these interactions at a molecular level affect how malaria infection and disease progress. We develop and apply new genetic methods based on DNA sequencing to knock out hundreds of genes in the parasite's genome at the same time and read out the phenotypic effect of the loss of these genes. The long-term goal of our research is to identify proteins with critical roles in the parasite's ability to establish infection and cause disease, which in turn may become new targets for future malaria medications and vaccines. 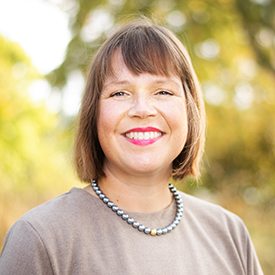 Interests: I love cultivating and working in the garden, and being out in the woods and by the sea with my family.

Other: In 2020 I returned to Västerbotten in the North of Sweden where I grew up, after about 20 years abroad.

“I want to be involved and actively convey and defend the importance and position of research in society, and that more young people should feel that research as a profession is something that is achievable for people with all different kinds of backgrounds. By working to make our research more open and visible, I believe that we can amplify society's trust and appreciation for research, and the Young Academy of Sweden is the perfect platform for this.”