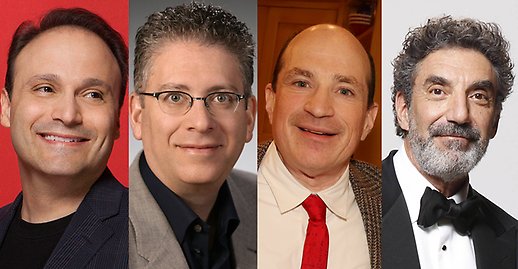 PRESS RELEASE: THE YOUNG ACADEMY OF SWEDEN has decided to award The Torsten Wiesel Midnight Sun Award – For Distinguished Achievement in Promoting Science to:

The Young Academy of Sweden is proud to announce the first Torsten Wiesel Midnight Sun Award to the creators and producers of the Warner Bros. television comedy series The Big Bang Theory. Created by Chuck Lorre and Bill Prady, who are executive producers on the show along with series showrunner Steven Molaro, the Big Bang Theory revolves around a group of scientists and friends living in Pasadena, California.

While the characters might be exaggerated for comic effect, the science is not. Science not only provides context, but echoes in the ways that the characters deal with life (e.g. “the friendship algorithm”) and as metaphor (as in the Schrödinger’s cat nature of a relationship). Science is treated with an attention to detail and respect that is rare in popular culture depiction of research laboratories and the work that goes on there. In a comedy format, The Big Bang Theory even addresses topics such as the difference – and sometimes conflict – between faith and science. The characters’ discussions concerning their research are not only accurate, but impressively topical, with recent breakthroughs quickly making it into the series. To accomplish this, the writers consult regularly with current scientists and academicians, active in the field. Of singular importance is Dr. David Saltzberg, who serves as the show’s scientific advisor. Dr. Saltzberg, an accomplished professor of physics and astronomy, is responsible for ensuring the show’s scientific accuracy and propagating the series’ iconic whiteboard equations. Many prominent scientists and inventors have guest starred on The Big Bang Theory, including physicists Stephen Hawking, Neil deGrasse Tyson, Brian Greene and Apple computer pioneer Steve Wozniak. The Big Bang Theory attracts television audiences around the world, and is the #1 comedy in the U.S. The show’s commitment to science is further manifested by the recent establishment of The Big Bang Theory Scholarship Endowment” at the University of California Los Angeles, supporting undergraduate STEM (Science, Technology, Engineering and Mathematics) students in need of financial aid.

Together, Lorre, Prady, Molaro and Saltzberg have brought the world of science to the television sitcom format with spectacular impact. Through their humorous, yet respectful, handling of the subject matter, they have made science itself a star member of the cast. In so doing, they have exposed a whole new audience to the topic and fueled a public conversation about research across the world.

The prize will be awarded by Dr Torsten Wiesel in Stockholm, Sweden, on 27 May 2016. Professor David Saltzberg will represent the laureates at the ceremony and receive the prize, an original artwork by Mususa Wiesel. Saltzberg will also participate in the award seminar in honor of the laureates: Science in Fiction, the seminar is open to the public. Registration is mandatory.

The Young Academy of Sweden together with Honorary Member, mentor and 1981 Nobel Laureate in Physiology or Medicine Torsten Wiesel were pleased to launch The Midnight Sun Award, in honor of Dr. Wiesel’s 90th birthday in 2014. The award is presented to a person, group of persons or organization who has done extraordinary work to explain or promote science to the public. A committee formed by the Young Academy of Sweden selects the awardee(s) following a nomination process that includes young academies from all over the world.

1. Torsten Wiesel Photo: Markus Marcetic 2. The Young Academy of Sweden arranged so that Torsten Wiesel was honoured on the Nasdaq digital billboard, Times Square New York, for his 90th birthday in 2014 Photo: Nasdaq (Click to enlarge)

Born in Sweden, Torsten Wiesel is a monumental figure in science. In 1981, Dr Wiesel was awarded the Nobel Prize in Physiology or Medicine together with Dr David Hubel for their discoveries in neuroscience concerning information processing in the visual system. Dr Wiesel is also a recipient of the National Medal of Science, the United States’ highest honor for scientific achievement. During 1991–1998 Dr Wiesel held the Presidency of the Rockefeller University. He was Secretary General of the Human Frontier Science Program 2000–2009, and he has been the Chair of the Committee on Human Rights of the U.S. National Academy of Sciences. Torsten Wiesel is the Young Academy of Sweden’s mentor and honorary member.