Conceptual art connects the atomic underpinnings of the neutron-rich calcium-48 nucleus with the Crab Nebula, which has a neutron star at its heart. Zeros and ones depict the computational power needed to explore objects that differ in size by 18 orders of magnitude. Image credit: Oak Ridge National Laboratory, U.S. Dept. of Energy; conceptual art by LeJean Hardin and Andy Sproles (Click for high resolution image, opens in new window)

What is the size of atomic nucleus? One might think that the answer to this simple question is well known, but it is actually not. The atomic nucleus consists of protons and neutrons (jointly referred to as nucleons). The protons are possible to measure due to their electrical charge, but knowledge of the neutrons has been harder to accumulate. Christian Forssén together with researchers from Chalmers University of Technology and colleagues at Oak Ridge National Laboratory (ORNL), USA, and other institutions, have found a way to accurately calculate the neutron distribution in atomic nuclei. The results have important consequences for properties of neutron stars in the Universe and are published in Nature Physics. 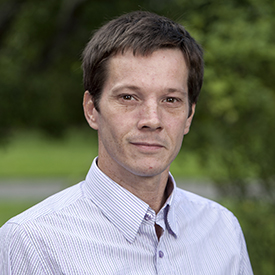 Nature Physics: Neutron and weak-charge distributions of the 48Ca nucleus

Chalmers: Computing atomic nuclei – from the microcosm to the Universe

–  Neutrons play a big role in providing the glue that binds the atomic nucleus together, but detailed knowledge is very limited as they are so difficult to measure, says Christian Forssén, professor at the department of Fundamental Physics at Chalmers University of Technology, who together with colleagues from ORNL have published a study on how to predict the distribution of neutrons in atomic nuclei, using ab initio calculations.

The results are based on a model of the nuclear strong interaction, developed by Christian Forssén and his Chalmers colleagues. In the ab initio method, nucleons are added one by one and the researchers can then make predictions that are more reliable than with the models used up until now, where many parameters are adjusted to fit the data. The research team studied the atomic nucleus calcium 48, containing 20 protons and 28 neutrons, by performing computations on ORNL’s supercomputers.