Professor and Senior Lecturer in Musicology at Uppsala university

My research mainly concerns music and music theory from the late Middle Ages and the sixteenth century, but I have also made major contributions from different aspects on music from later periods. The aim of this research is perhaps explained most easily as a quest to understand why music looks (and sounds) the way it does, how individuals acquired the skill of compositional techniques, who wrote what, and how extant sources relate to each other. This could include e.g. identifying shattered and complex fragments and lead, via philological reconstruction, to a modern performance of the music in our own time.

I finished my Ph.D. at the University of Liverpool in 2007 and became associate professor at the Department of Musicology at Uppsala University in 2013. 2006-2015 I was head of Rare Collections at the Swedish National Collections of Music. I am a board member at the Swedish Royal Academy of Music since 2008, and have been leader of the Swedish working group of Répertoire international des sources musicales (a research project with working groups in 36 countries). At present I am working with a project on Early Modern Lutheran ecclesiastical music, funded by the Swedish Research Council. 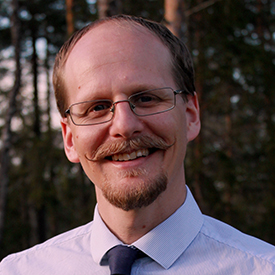