My research focuses on medieval literature in a European perspective. I am interested in Arthurian romances – tales about King Arthur and the Knights of the Round Table. These tales spread widely in medieval Europe and I examine to what extent this spread contributed to the Europeanisation of medieval culture. In my ongoing project I study different descriptions of landscapes and borders. My starting-point is a number of Arthurian romances written in Old French, which have been translated into other languages, mainly German, English, Icelandic and Swedish, but also Italian and Spanish. I also study tales that were written originally in other languages than French and their links to the French tradition. The earliest texts that I study were written in the late twelfth century whereas the latest ones were written as late as in the sixteenth century. The different historical and cultural contexts play a central role in my analysis.

Sofia Lodén at the Swedish Collegium for Advanced Study 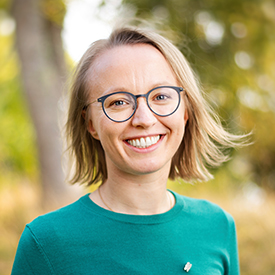 Interests: Literature, film, art and food. I practice yoga and walk in the forest.

Other: I once offered a future Nobel Laureate a Swedish Falu sausage and boiled potatoes when I was quite young.

“First and foremost, I want to raise interest in research outside the university and I am particularly interested in reaching children and young people – the Young academy of Sweden does a fantastic job of reaching out to young people and I want to be a part of that! I also want to work for building more bridges between different disciplines, and especially between the natural sciences and the humanities. All fields of science benefit from more interdisciplinary collaborations, and in the case of the humanities, I believe that it is vital. Finally, I would like to have the chance to familiarize myself more with research policy and work for increased and better internationalization of Swedish research. I have lived in France and Italy and am interested in issues related to languages, European cooperation and exchanges.”