On December 6 we had the great pleasure to host a career seminar at Luleå University of Technology. This was the final event for 2018 in the ‘SUA on tour’ project where we have visited a number of universities to discuss career paths for young researchers. 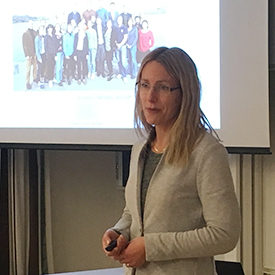 The seminar was opened by Maria Tenje (chair of the Young Academy of Sweden) who talked about the Academy and encouraged the audience to apply to become members. Pro vice-chancellor Per Weihed then gave an overview on the career paths at Luleå University of Technology (LTU), followed by a panel debate where he was joined by Lars Nyberg (Dean of the Faculty of Humanities and Social Sciences) and Tommy Viklund (Head of Human Resources). There was a lively discussion between the panel and the approximately 20 young researchers in the audience. In parallel with several other universities, LTU so far seems to reluctant to implementing the new position Associate senior lecturer (biträdande universitetslektor). This was acknowledged by the panel who also invited young researchers to take active part in the ongoing strategy discussions where recruitment is an essential part.

The seminar was moderated by our CEO Anna Wetterbom.