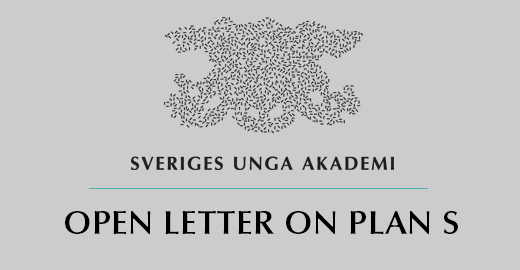 Open letter on Plan S to the European Commission, Science Europe, governments and research funders within the EU

Published by the Young Academy of Sweden on November 15, 2018 in parallel with the Nordic Open Science conference hosted by the Swedish Research Council and NordForsk.

We – the Young Academy of Sweden – agree that results from publicly funded science should be open and accessible. As scientists we are eager to inform the public of the latest research results and are worried about the high costs of scientific publishing. However, this will not be solved by Plan S and the revolution proposed by Robert-Jan Smits . The Young Academy of Sweden represents the generation who will be at the forefront of science for the next 20–30 years. Young scientists are not in need of a revolution today! They need a predictable system for dissemination of scientific findings and results, a system which remains robust over time and which has acceptance within the science community.

Modern science is founded on enlightenment principles of observation and public display. Likewise, communalism – common ownership of intellectual property – is one of the Mertonian norms of science. Open access can be seen as a natural publishing strategy for academic work founded on these principles. Citizens, social actors, and industry should have free and easy access to the results of our tax-payer funded research. A foundation of our democracy, access to our research can also be a tool for social justice, and a resource for innovation and growth. These ideals underpin policy both on the European and national arena. They are directly expressed in the EU requirements for open access publication of projects financed through Horizon 2020 as well as in the EU Council conclusions[2] on the Transition towards an open science system adopted by the European Competitiveness Council in May 2016. The Council conclusions consist of an ambitious European agenda for improving European competitiveness in science and innovation in society at large, mainly through open access to research output (including publications). As a consequence of these conclusions open access (and open science) is on the national agenda, as well, and both the Swedish Research Council and the National Library of Sweden have received specific tasks from the Government.

Although rooted in the scientific ideals and the Council conclusions above, Plan S goes much further and aims to completely overthrow the current publication system. We agree that the pricing strategies of some journal publishers are very problematic, including extreme profit margins, exploitative subscription policies, and charges for both library subscriptions and open access publishing to the individual author(s). However, these concerns are specific to a subset of journals. In a publication system serving all scientific disciplines it is crucial to remember that journal article publication is only one way of making scientific results public. The recurring clause about monographs in open access documents as a special case demonstrates that the open access discussion is not really about access to results or access to publications. Instead, the current discussion is really about the publication and subscription costs of a subset of journals. The book industry and its profits (and the publication strategies of many smaller journals, and practices for open access to data) employ very different economic models and are, therefore, awkwardly shoehorned into an open access discussion framed by subscription and publication costs. Likewise, there already are some scientific disciplines where the norm is to deposit articles in open repositories so that they are open for anyone to access, including the practice of depositing pre-prints. These practises would not be acceptable according to Plan S.

The current, narrow perspective on open access with its focus on economic models of journal publishers, threatens the very goal which it hopes to achieve: broader access to scientific results. That would be a very unfortunate and sad development.

Replacing a known system with an unknown

The current publication system has flaws. The high costs for access to a number of journals is one, the race for high impact factors is another. However, before replacing the old system with a new one, we need to analyse the consequences and which type of behaviour the proposed system will encourage. The implementation timeframe of Plan S leaves little time for thought and analysis. It is true that policy makers, as well as (some) research funders and scientists have spent years discussing open access and, that in some scientific disciplines, open access has been successfully implemented. Nevertheless, for most of the research community, Plan S marks a dramatic change to an unknown system with unknown consequences. As scientists we cherish exploring the unknown when it comes to research. But when it comes to the structures surrounding our profession, such as the publication system, we prefer predictability and robustness over time to ensure that we have time to focus on the quality of the science.

Plan S does not address concerns about research quality, only publishing format and we worry that Plan S may itself introduce new problems in the system. Plan S threatens to introduce pay-to-publish mechanisms which could severely jeopardize academic quality, and thus create chaos in the current – relatively well functioning – structures for peer review. This will have far reaching effects at various levels, from individual publication to evaluation for grants and research funding, and to evaluation for promotion. Such an upheaval may not pose a significant problem for professors drawing close to retirement, but for us, with at least 20–30 more years to work, it is a significant concern.

We worry that the proposed change, particularly as implemented in a top-down way with a short timeframe, will disproportionately penalize younger researchers who do not have the past track-records or professional clout to manoeuvre through a new publication and evaluation landscape while still building and maintaining a scientific reputation. The strict definition of acceptable open access and stringent requirements found in Plan S threatens to: penalize younger researchers with limited budgets; prevent them from publishing in many top journals; and create structural difficulties for potential international collaborations involving researchers outside of Europe. It is said that these issues will be addressed once the system has “flipped” to open access but we would rather discuss them beforehand.

Establishing oneself as an independent researcher, pursuing cutting-edge research and education as well as constantly applying for funding is the professional reality for our members and many other emerging scientists. Navigating a constantly changing publication system on top of this will take time from our science and students. We have extensively searched for information and asked decisions makers about how funders, universities and governments will assess the quality of research under Plan S. Unfortunately, this is not yet clear as it is “work in progress”, which implies that the generation of young researchers today will be guinea pigs when a new publication system is developed.

It is thus our conclusion that the radical Plan S will not be helpful in supporting young scientists, nor will it improve European competitiveness in science and innovation as desired by the ministers in the European Competitiveness council. On the contrary, the proposal by Robert Jan Smits threatens to shatter researchers’ trust in politicians and destroy long-term collaborative goals for open science.

What should we do?

The main goal of Plan S is to overthrow the current publishing system in order to radically reduce costs, particularly for journal subscriptions. We agree that the costs for publication and subscriptions are problematic and have to be addressed. Lower costs could be achieved through tougher negotiations with the publishers. Governments and funders should team up with university libraries in these negotiations, both nationally and at the EU-level.

Another real key concern for us is to rally the support of funders and governments to ensure that authors retain copyright of their publications, unlike today where the journal receives copyright in return for publishing. This practice would allow researchers the right to archive their articles in a repository of their choice, thus giving public access to results. Supporting academic authors in the right to retain copyright of their texts would be extremely helpful.

We need a predictable system for dissemination of high-quality scientific findings and results, a system which is robust over time and which has acceptance within the science community. That will not be achieved by Plan S (although such an endeavour could certainly give the impression of executive power from decision makers) but rather from hard and steadfast work within the research community.

Please stop the Plan S revolution and take the time to formulate a proper plan!